Bug mentions and suggestions after my first ten hours play.
This topic has been deleted. Only users with topic management privileges can see it.

Quite an experience witnessing the changes throughout the insurgency series but, as everyone has, there's been a few bugs or issues i've come across and suggestions that have been aching in my head since then and hopefully putting them here will help them be investigated further.

Hopefully most of these wont have been mentioned before, but if so, link me other posts so i can check the already existing discussions.
Disclaimer: My pc cannot give good video footage, if not at all (maybe because i play borderless). So screenshots are my best bet. Most i haven't had the chance to capture as i haven't come across them again, but i guess ill stick them in if i ever do or can.

Higher prirority (in my mind) are at top, whereas suggestions are down the bottom with how important they are.

Control locking
A difficult one to explain but easy to run into, if not replicate. Certain actions, swapping weapons, vaulting, are difficult to fluidly transition to your next move when you have to re-press your keys. Sprinting being a common issue. If there's a fix so you can just hold your sprint key while just waiting for the action to finish, it could help save a player's life and, more importantly, stress. It's the last thing I, myself, would want experience in a high-pressure scenario.

Second-step reloads being more lenient
I've had my fair share of moments misjudging the exact time a magazine or a round has been inserted, which is the exact moment (half the time) when said mag/round is inserted completely. 100%. not a moment sooner.
It's further confusing when sound queues still trigger. Sprinting because you see the magazine right at the port or whatnot; all it would take is a good push, which would be achievable when beginning to sprint anyway.

Bots' sight and obstructions
This one is probably a painful one to sort out, but to add some more behavior to AIs looking through foliage, trees, shrubs and the edges of smokes, and change how much is seen from you actually counts as being "seen" by a bot. I've noticed a lot of moments where bots -barely visible over a small mound, when both you and them are prone- try firing through the ground. That and they can spot your tippy-toes when you arent moving. Thats more me just being salty more than anything though.

Firing sounds failing to play in multiplayer
I've noticed the new sounds you're going for are loops with automatic fire, which is fantastic for me because i hate stuttery gun sounds, but when sound loops fail to play, they will stay that way until you release and pull that trigger again. I'm not sure what causes this one, but I do tend to run into it often when manually bursting with very short pauses, and with high or fluctuating latency.

Blackout overlay bug
I've come across some dark overlays that appear when exiting menus. Pictured below: 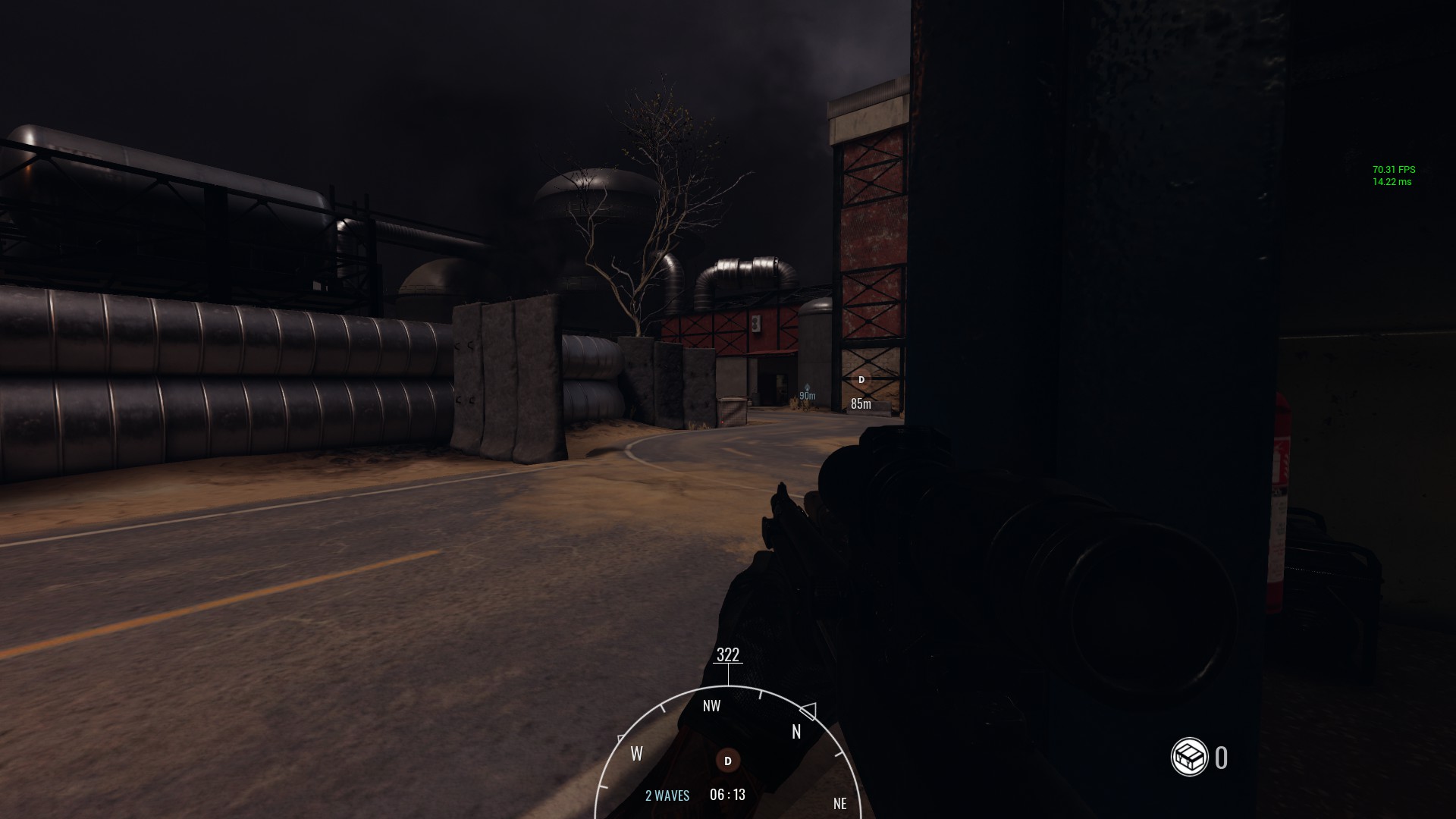 Probably not too obvious, but holding this side to side you can see its much darker. It fades over time, but that time is about thirty seconds.

(Audio) Vehicles pitch bug
Im sorry please keep this, I'm a terrible person but I still find this hilarious.
Exit a menu when near a helicopter or on a truck at the beginning of a round and notice the squeak or buzz you get from the engine/rotors.

Viewmodel Hands missing
Discovered in multiplayer when changing class/loadout between rounds. Respawned with no hands, but the rest of the viewmodel was perfectly fine. 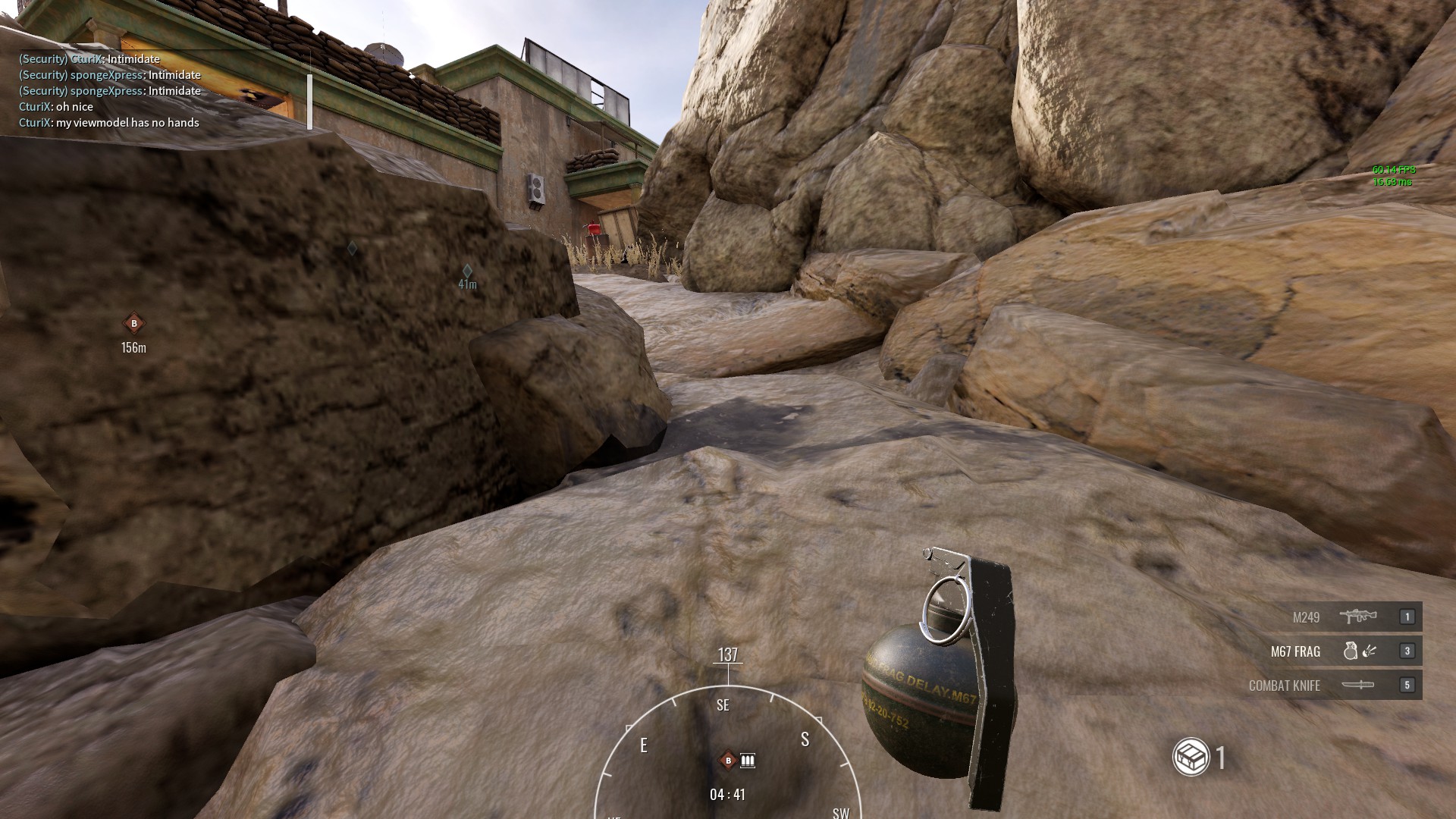 Melee (just...like the entirety)
I've honestly never been a fan of melee, and it's probably because i always rely on it when its point blank and your gun decides to nope, but somehow is still favoured spamming. There needs to be something that can make it help you out in those dire situations that would make them shine. Things like a longer range, a wider radius so you don't have to aim directly at them, direction and/or position assisting to keep you from missing like a dingus, something where, if you were facing them, you take a good swing with your gun to knock theirs out of the way, making them to turn to you again if they hadn't been taken out already.

Near-wall weapon motions
This always gets in the way for me because when something in front of my eyes passes, I'm suddenly blind as a bat.
If the motion when the weapon is raised out of the way wasn't so in your face and blocks everything in ADS, that would be grand.

(Audio) Step timing
I've never heard someone crawl with so many steps taken, perhaps if they could play slower?

Bolts and slides after second-stage reload
I have absolutely no idea if this is true or not, so feel free to educate me, but i don't know if firing your last round without a magazine locks the bolt/slide. You'd have to cock your weapon again manually after a new mag if that happened. Not to say that in a way that doing so should further punish you for doing so, but an alternative animation that finishes at the same time as it does now would add a bit more to your attention to detail. Again, disregard this if all of this is incorrect.

(Audio) Drum magazine
As neat as a collection of sounds is universal among other weapons for the drum magazine, the eject/insert sounds for it are very underwhelming, especially compared to what standard magazines sound like. It kinda kills the whole feeling of having the upper hand in capacity (most of the time)

Jump Camera Twitch
Is this intentional? I know landing from a distance kicks your view to the center, but the camera flicking to an angle when you jump? Maybe its just me being touchy.

This last one is the least important but i guess if you're looking for content-wise suggestions, here you go
Handgun Attachents
A small list for handguns; Just in case someone wanted to be more utilitarian with their supply points but wanted to give their pistol a couple parts to compensate.

This is all i have so far, I would like to see the more critical ones addressed first but..who knows when or how difficult it would be to get them fixed up. As for some of the suggestions, it would be something to shake things up, that's for sure.
Im sure i can either add to this list or compile a new one the more i play, too.

Thanks for your time, forums and NWI