How to improve log loading & transport
This topic has been deleted. Only users with topic management privileges can see it.
U
U
Unster Reply Quote

@sodoma Cool. I also just made a new post in the bug forum about this. I couldn't find the old post where someone else mentioned it.

Oh yea the load packing issue, I actually ran into that on PS4 on the, I believe Mount Logmore map. Good to hear that's being passed on to the dev's.

Also something I've been wondering about. In multiplayer, should other players activities effect your map? Like if I'm on a map with a buddy, if he gets stuck really bad, digs himself in deep, and basically creates a huge bog hole. That area he got stuck in will appear in his game, but it won't appear in mine.

If somebody gets stuck and makes a huge bog whole, shouldn't it appear in all players game?

Like this picture shows what I'm talking about. In this picture you can see my truck tearing up the beach and leaving tracks. However my friend is just ahead of me, and on my game, his truck doesn't leave any tracks. 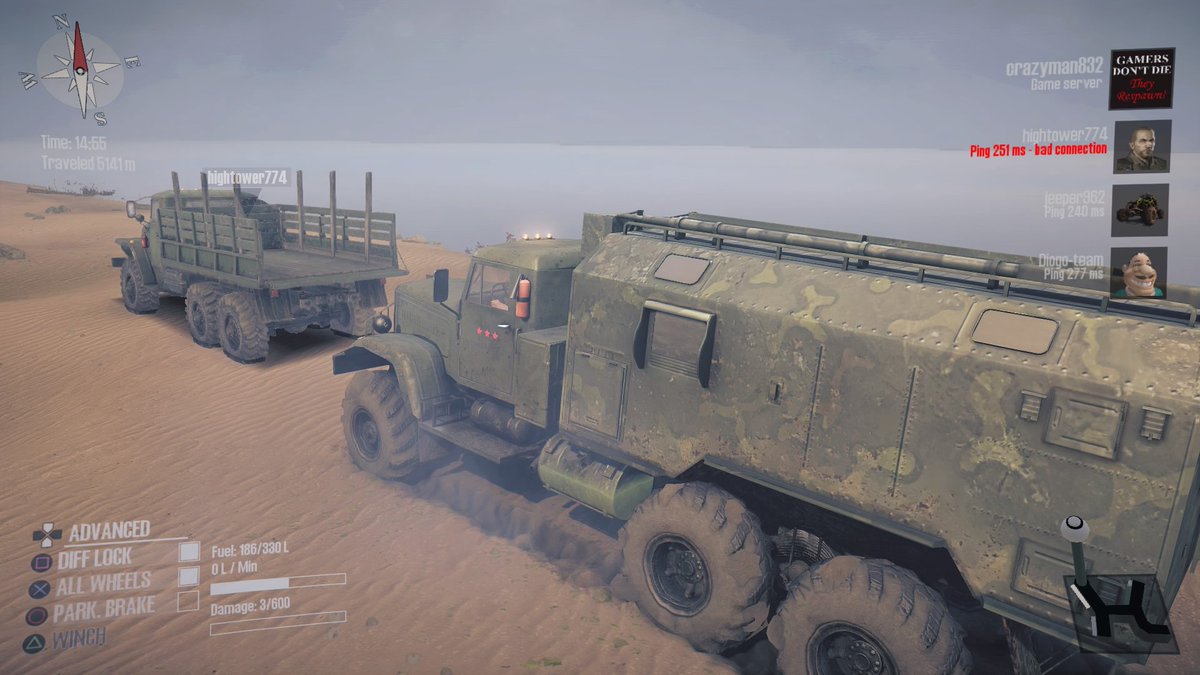 My best guess is this is caused by the Pier To Pier server system, so everybody console is generating it's own version of the map. I'm guessing this is something that probably can't be corrected unless we move to dedicated servers in Mudrunner 2?

But still, for a game that's basically all about physics, ground deformation, etc. It kinda takes you out of the game to a degree running around online and having other peoples vehicles having no effect on your map.

Arguably online should be more difficult then single player. With 4 people running around maps should degrade and getting muddier 4 times faster then if you was playing by yourself, However that doesn't happen in Mudrunner,

I would like to see this corrected in Mudrunner 2. I should see other players tracks, if somebody having a hard time on a trail and then I go though that same trail, I should have to deal with all the holes the guy dug and all the mud he made, if there is a common trail being used by multiple players then trail should degrade quicker then it would on single player.

All this could greatly add to the online experience and realism of the game I think.

as I see it, you are right. Even in MP everybody is basically playing its own map and just very basic things are shared. Objectives, watchpoints, unlocked garages or trucks and I think that is all.
As I see it, that is caused by the basic game idea being "too simple", honestly whole MP seems to be a bit "patched" onto a original thing. Therefore tracksm truck sound, lights and some other interaction are not performed.
I have the faith, that now DEVs have better idea how final game should look like and behave, so MR2 will be much better...

As a single player game sure some tweaks and things can be made, however their isn't that much I have to complain about. Online mode however leaves a nice bit to yet be desired.

@justinlynch3 Or you can be like me and just enjoy single-player.

@justinlynch3 Or you can be like me and just enjoy single-player.

I really have nothing left to do on single. I've beaten every map on casual and hardcore, completed every challenge, and have a 100% completion trophy rating in the game.

Besides I like going online and witnessing the randomness of what other players are up to.

Just because one criticizes something and offers suggestions to make things better in the future, does not mean said person aren't having fun with what they currently got.

@justinlynch3 Yes, I forget you are on a console, and I agree with your regarding MP. On the PC you pretty much have an endless supply of maps, and I haven't even felt like trying MP.

@unster with a good friend(s) it definitely worth it...

@justinlynch3 Yes, I forget you are on a console, and I agree with your regarding MP. On the PC you pretty much have an endless supply of maps, and I haven't even felt like trying MP.

Yea my laptop isn't really a gaming rig. It has like 2 or 3GB of ram, and whatever type of Intel chip just a casual use laptop had back in like 2012 or so.

Anything more then a browser game, this thing isn't playing it. lol

I can totally understand that based on the way the physics engine works, implementing a full 'per log' load is unnecessarily complicated for the level of reward. I don't mind the current system (except for when apparently my truck is not lined up properly for random reasons unknown to the world).

The one thing that I would appreciate, mentioned above available in mods, is the idea of picking up logs from the ground. Again, yes, I appreciate that some people don't wish to do this but then again that's why you can have hardcore mode or perhaps an additional 'hardcore scavenge' option. I actually like the idea of logs being randomly dropped within an area (not just on one pile) so that you are literally having to go around finding logs to fill your load out. Either per load or in fact such that say a mix are spread out across a variety of scavenge areas and you would have to go and pick them up, either per run or as a 'scavenge and sort' mission followed by a 'return to pick up and take home' mission.

I think MR2 has the option of adding a bunch of additional game modes or perhaps a better way, more strategy focused challenges. This allows people who just want to play to play, but for people looking to extend their gameplay beyond 'clear map once' to having more complex developer designed problems to solve.