Skalgrim Mod - Do you want bigger fleets and better capital ships?
This topic has been deleted. Only users with topic management privileges can see it.

Hi guys, (and gals) Skalgrim here. So I'v been modding the game alot and I was just going to ask some questions to see if people would like me to release the stuff I'v done.

Things I'v done with my mod, in a short general description:

First up: Way larger fleets for both skirmish and the campaing. Lowered shipcost for all ships to less than 50% of the original. Increased campaign fleet size so that you gain larger fleets, massive really, as you progress. This also affects the ai. If your computer has problems with ten ships on screen, this is not a mod for you. If you can handle 40 or more ships, good for you. You might like this.

Rework of many abilities: a bunch of the abilities have been buffed or changed. In general I wanted to make the choice of uppgrades more important. Killing a enemy admiral is more prioritized now. Or you know, just suffer their wrath if you let them be. Placing your plasmabombs etc matter more now.

Statchanges of ships and weapons: So you have a battleship. Why is it just a fraction better than your GC or C? Well with my mod you will most likely have a couple of battleships, but anyway, they are baddasses now. As in they have more health, crew and since they carry the heavier weapons we can just skip to the next point: Weapons.

I'v changed most of the weaponstats, especially lances, plasma and the heavy versions of weapons. More umpf for you, because why wouldn't you want to be able to do more damage with your larger ships?

Titans. Well. I wanted Titans. So I have Titans.

I'v done a simple swap- meaning that I'v for instance changed the Oberon Battleship with the Macragges Honour. You can have it for any Imperial fleet in both campaign and skirmish. And its buffed at that. Because why not. If you want a fleet of them you will probably crush most enemies. I just play with one for Spire to use.

Current modversion is mostly focused on Imperial campaign/ skirmish. Lots of tweaks for these factions in particular including how fast you can build you fleets (all shipyards produce more buildpoints and can store more at the same time. Your fleetsizes dictate that you need this.) how much money you earn from captured planets and what buffs you get.

Are fewer in number - but far deadlier. Even your massive fleets will be hard pressed. You will loose ships. Necron players will enjoy the slightly faster ships, the much more dangerous weaponry (that are more different from each other now) the more powerfull abilities, and you can jump farther and faster. Your ships can take more damage, repair faster, and the Cairn is an expensive behemoth now.

The swarm is vast. And hungry. You have massive numbers, and a few of the weapons have massive boosts in damage, but still piss-poor aim. But that doesn't matter since you have so many more ships now. Blot out the sun. Because a computer should be able to lag when a tendril comes to your home system. Facing the nids is a daunting task in many cases in the campaign.

Lances are better now. That is pretty much it. Also, you can have more of everything. Chaos fleets tend to be sneaky and deadlier at distance now.

Others - some changes to weapons, shipstats, and costs. Minor changes to Ork, Eldar and Tau so far. Will be looked at in later versions.

Balance - will be an ongoing thing, but this is not meant to be "balanced". This is mainly to make the imperial campaign a fun experience of epic and grand battles. Adding and removing titans and other changes might come as I continue working on the mod. Or I'll just make other versions for the Tyranid and Necron campaigns. This is mostly because Im waiting for the VI mod to come out.

Do you want me to do a release of what I'v done so far?
Suggestions to things that would make the game better?
Is Titans something you want for the different factions? (when there is a Titan my current method means you'd have to "loose" one ship in your current rooster to have a titan istead. Will try to get this to work in a better way in the future. )

I'd love if you released your mod even if its only what you have, i really want to try to do the camp on hard, after beating it on easy and most of normal but im being a chicken because im new to this game and i fear that i wont have a big enough fleet to handle some of the missions XD

I'd love to see you release your mods, but please do so in a manner that we can pick and chose. For example, I'd just like larger fleets in the campaign.

@psyckosama thats mostly doable. Bigger fleets in campaign would also come with some campaign related changes, but not stats/ships.

Im excited to see youre whole mod. You throwing any "new" ship classes in?

I'd be curious to know if you got stuff like the Ork Space Hulk to work cause I was never able to. Did the same swap method that worked for the Macragge and just ended up getting that error where no ships appear in fleet selection.

I'd love to try out something like this! Would be worth replaying the campaign with the Imperials.

As for suggestions; would you consider buffing defensive structures (ie. turrets and starbase) to "scale" them slightly towards larger fleet sizes? They already feel super weak mid/late-game in the original game, I'm afraid that with larger fleet-sizes they will be even more obscure.

@neighbor-kid Nope. Not as of yet. It would probably be doable, but they would look like other shipclasses with different armaments/stats. Im waiting for the new necron ships to see how that changes the game first.

@smoothrunes Havn't done much work on the orks at all so far. So no. Havn't gotten all titans ingame, currently my focus is mainly the Imperial Campaign. Adding all of them with the current simple swap-method would break the game as my larger fleets also mean that you could face several titans with that method.

@Sybarite I'v buffed the Starbase, and it also uses my buffed weapons, but I might need to buff it more as it still gets stomped by especially Tyranids. Their fleets are so large (during invasions) that they tend to loose a lot of ships to attrition from crashing into one another.

The VI mod is Veritatem Imperialis, the original mod for Battle Fleet Gothic Armada 1. They are the reason that we can mod the current game, and many of us are waiting for their mod to release as they are an excellent small team of modders.

Since many of you want to try my mod out I will release it in its current form in a day or two. Will do some last minute changes for balancing and I'v decided to release it in a way that lets you pick what parts you want.

Any update on this?

Also thanks for your earlier explanation. I never played the first game and wasn't aware of the modding scene.
I've even seen tyranids crash against each other in vanilla

@sybarite Yes I did some tweaking last night and further testing. Just work that has been taking up most of my time, but don't worry I'll post it today, worst case tomorrow. Weekends do equal more free time.

Eagerly awaiting this, been putting off learning how to set up modding per the other threads, this should give me some motivation to finally get round to it

@skalgrim-fellaxe Do you have a changelog? How extentive are your edits?

love how we are all so eager and excited for this mod, luckily i get weekends off so i cant wait to play campaign with bigger fleets

@caliger_reborn Nah not really, the changes are pretty massive, but the player will get the chance to select parts of the mod for their own liking. So for instance there are several unit-based changes - thats one part of the mod (I will try to decribe most of them and give examples) using that can be done by itself. Then there is changes to weapons - which can be used by itself. Then there are campaign changes that can be used if you just want bigger fleets and more resources but none of the other changes. Etc etc.

As I'v stated above I'v changed alot of things, from fleet-sizes to ships to abilities. And I plan on doing more changes. But getting this out in its unfinished state is better than nothing. And, worst case scenario, you guys don't like the changes but still want bigger battles, I still got you covered.

Remember though, the changes I'v made are "mostly" made for Imperial campaign play / also skirmish. Further versions are planned for the other factions but since I'v yet to beat the Imperial campaign myself that will take a little more time. I mean, it goes MOD - TEST - PLAYTEST IN CAMPAIGN - REPEAT here

And that takes some time. Also matches are longer with 30 + ships.

Take a look at this for instance: 6 Battleships. Pretty sweet. 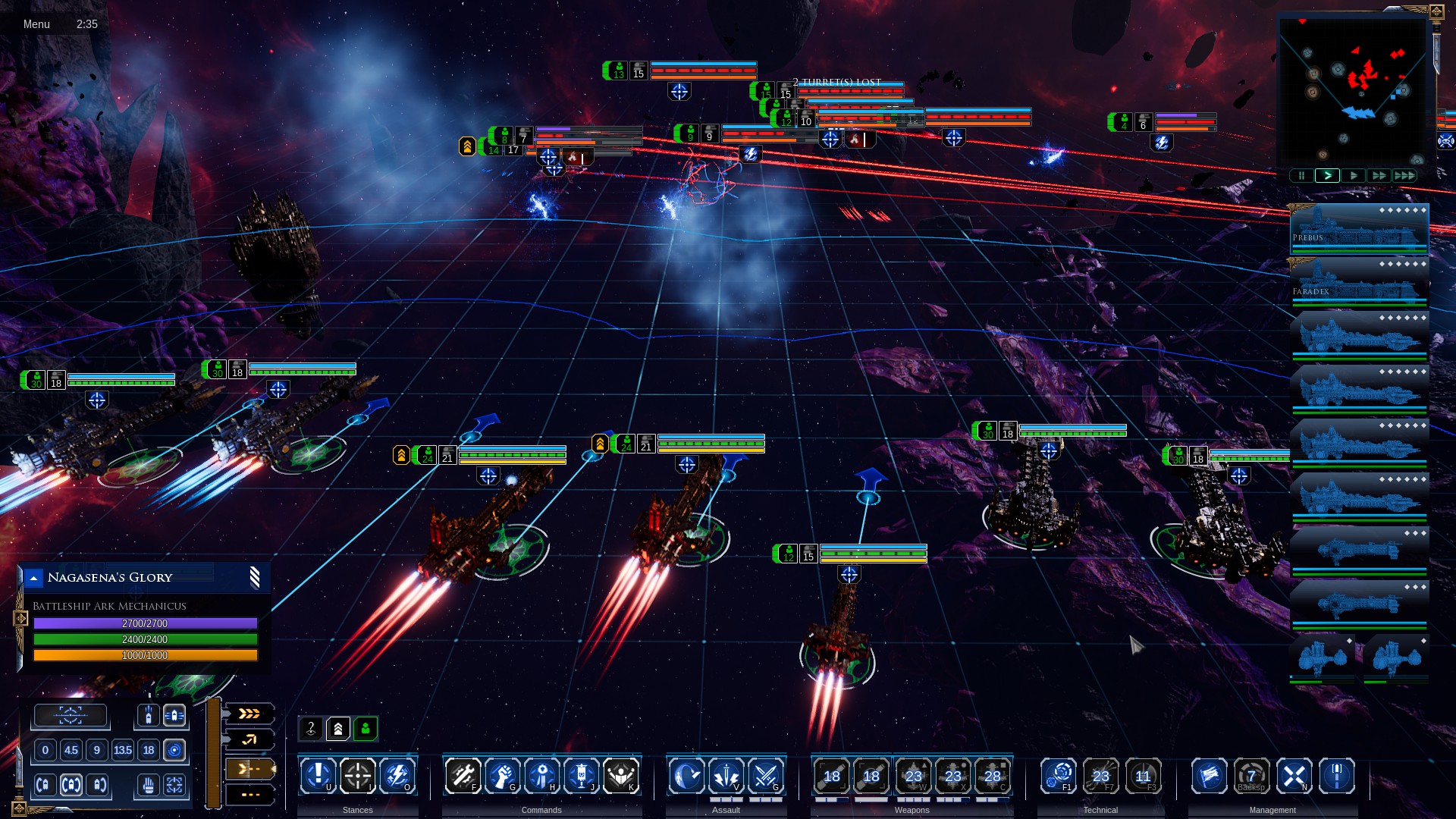 @skalgrim-fellaxe Well I'm currently developing VI, as you know, and my area is re-balancing which is why I ask the question.

Although I am curious what the general consensus is on how large battles should be. I have reduced prices for a lot of ships (and increased a few, as part of faction redesign), but what's the price range people want? 6 battleships seems excessive to me.

Here's my design philosophy: Battleships/GCs should be rare, so I aim to buff the stats rather than reduce their price so you can bring more. While BCs and lower got dramatic price reductions. I want to stick to that model, but if people really want to bring 6 battleships, then prices would need to be re-evaluated across the board.

@caliger_reborn I like the tabletop system. For every two cruiser you can (not have to) bring one bc and for every three cruiser and/or bc you can bring a gc and/or bs. With that limitations you get very varied fleets.

imo 2 bs in one fleet is enough.

@caliger_reborn What I'v done is make battleships way tougher, and more valuable than the standard cruisers and even grand cruisers. More shields, health, crew and more powerfull weapons (Especially heavy-versions) This gives more "bang" for your buck in choosing BS. Also since the abilities are more powerful, especially your chosen Admirals ship will be important. Then again, the enemy also fields more BS in the battles in general. They just never field ONLY BS.

But you can. And thats quite fun to do.

Its just that Im trying out the outer limits here in battlesizes, and I kind of feel like I'v hit that point. Battles are becoming disorganized and chaotic.

Most BS are at around 200-250 pts in my mod, Cruisers and GC go for between 70-120 pts mostly with titans jumping up to over 350 pts. But since you can have fleets of up to 1500 pts, and battles of up to 2000 pts (in my current itteration) that also means that you can still field a ton of massive ships. Including BS. However that is just me pushing the limits. Remove my added fleetsizes and you can field smaller fleets of maybe 4 BS tops. Thats the ongoing trial and error. And people will be welcome to add their input to that.

Working on the mod-release right now. Not sure how long time it will take, but in the next few hours it should be up.