Bug: "AntiCheat / Hack tool detected" kicks me from the game, seems to happen randomly, and not all the time, can play other EAC games fine. Info in thread.
This topic has been deleted. Only users with topic management privileges can see it.
B
B
bensecdev Reply Quote

To start off, I'm a senior security software engineer by trade, specializing in malware detection & prevention. I love playing your game, I have around 400 hours in it. I often will have various samples and tools on my computer, but this has NEVER been an issue for me. I always make sure I close anything work-related before playing video games.

I am able to launch the game and get into a match. However, after a few minutes I am kicked from the game, and an error message displays that says something along the lines of "AntiCheat / Hack tool detected". I am NOT banned, I do not have any cheating related material, and I do not encounter this issue on Rust (also uses EAC). I believe it's a bug, I'm able to close the game, relaunch it, get into a match, but then again after 1-5 minutes, I am kicked. I do not have any bans, people are going to assume that because of this thread, but I want to reiterate that I am not banned.

I don't think it's related to EasyAntiCheat, it doesn't seem like anything has changed. I contacted them for support regardless. I would like to note I can play Rust (EAC), Apex (EAC) just fine, and I do not encounter this issue.

I would also like to note that I can play Squad just fine. That game uses EAC as well, and I have no issues playing it. I'm already frustrated at the low player count of this game (can't play competitive, 30-minute queues), but you guys have a great roadmap and I was along for the ride. Now that I literally can't play, I think I'll just start playing that one again if this isn't able to be resolved.

I took a look at steamDB, and the only thing that's changed recently is "Insurgency: Sandstorm Dedicated Server" 11 hours ago: 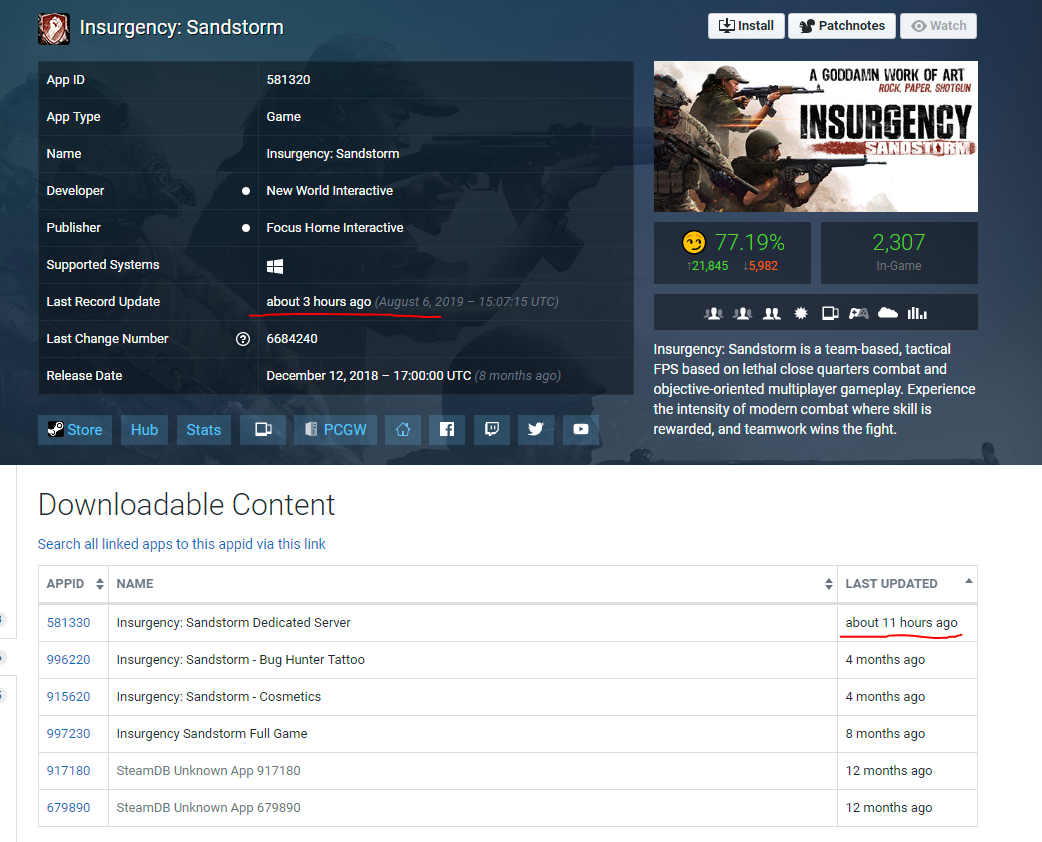 I also took a look at my EAC directory, and it does not look like any of the files have updated recently. I've also tried uninstalling and reinstalling EAC, and I've verified the integrity of the game cache. I've restarted my computer, and it hasn't helped. I've restarted my computer with nearly every service disabled (practically safe mode), and I still encounter this issue.

From one developer to the next, please investigate this issue, or rollback the previous update that was made 11 hours ago. I'm not sure how many people are affected by this, but I am not able to play the game. I believe I'm getting a loss every time it kicks me as well. It doesn't even seem like I can play local play. This game doesn't have a ton of people ~2500 active usually, so I doubt there will be a lot of reports / debug information provided for this issue.

When did the issue first happen?

So what changed guys? Did you guys update your version of EAC, did EAC ship you a new version, did you update the dedicated server for official matchmaking? It was fine at 2:00 AM EST, not fine at 12:00 PM EST.

Thanks for bringing this to our attention. I've already passed this thread on to the team, and they're investigating. I'll keep you updated here!

@bensecdev Can you give me your Steam ID, please? Did you play on the normal branch or the crashtesting one?

Feeling otherwise boring when someone hacks in the game, I haven't played it in a long time.

Please update if there is a solution to this one as this has begun happening to me as well. Last kick was today, December 27, 2019 at 19:10 GMT+8 on an Asian server. I am playing on an ASUS ROG STRIX laptop model number GL502V. I detest cheaters in multiplayer games and I feel scandalized by the server kicking me because of some anti-cheat violation which I know I don't have. If there is a list of programs that trigger this within a standard Windows 10 boot that can trigger this please list it. I like the game and I hope this will not become something that I will have to wait a year just to play again because of some over zealous anti-cheat program update.