SnowRunner - FAQ
This topic has been deleted. Only users with topic management privileges can see it.

We've put put together some of the most commonly asked questions about SnowRunner here for you. We hope this helps clarify any questions you may have.

Q: What is SnowRunner?
SnowRunner, the sequel to MudRunner, is the ultimate off-road simulation experience featuring incredible snow and mud physics in beautiful and wild environments.

Q: Where can I buy SnowRunner?
You can use this link for all platforms: https://snowrunner-thegame.com/shop

Q: What platforms will the game be on?
At launch, the game will be on PS4, Xbox One, and PC via the Epic Games Store.

Q: Will SnowRunner support mods?
Yes! SnowRunner will definitely have mods at launch on PC, through mod.io. We’ve worked a lot on the mod structure and this will benefit all platforms. We aim to support mods on consoles post-launch as well.

Q: Will the game be supported post-launch?
Yes, we have big plans for post-launch content and will announce more details about this closer to launch.

Q: Will SnowRunner have Microtransactions?
No.

Q: Will there be multiplayer?
Yes, SnowRunner will support up to four-player synchronous multiplayer.

Q: Will SnowRunner have RTX support?
It is currently too early to tell, but we are exploring the possibility of having features like this.

Q: Will there be a Beta?
Yes, SnowRunner will go through several rounds of Beta testing. We highly value our community’s input and want to involve them in the process leading up to launch. More details on the dates and specifics will be announced at a later date.

Q: Will there be mud maps?
Absolutely. Mud is in our blood! SnowRunner features maps with snow and maps with mud.

What about weather system, it would be weird to have snow setting without snowstorms, rain and occasional mist appearing in the mountains.

I think new engine could support that

@zamal I'd like to know if at leaset there will be snow flakes falling sometimes as in the intro of the trailer. That'd be cool. Anyways. Thanks for posting this @Jellyfoosh

Definitely we need normal weather, rain as minimum. Rain, affecting not only the trucks and terrain textures. The road and mud should be affected as well, becoming easier after sunny day or two, and impossible after 6 rainy hours. Some mods trying to reach such immersion but its only possible on new engine and new game.
And now we have both, so lets keep the faith!

I worry, will the game play and feel like mudrunner? Also will the slow turning speed make a return or will we get a option to adjust that to our own liking

Will snorkels be realistic to vehicles and allow them to go deeper into water?

Will we have a truck trial map (fun open mess around free play map)?

Will there be map based missions.
For exampme: the ability to let each player chose their own objective to make money in game to buy truck and or customisations for those trucks?
(This brings me to the economy question for the game)
Will there be an in game economy based around in game money to purchase different vehicles and or customizations for those vehicles such as paint color, paint type, vinyl Type and accessories like billboard, roll cages, spare wheels and extra lights.

Will there be different wether effects that may or may not also effect the map status, for example: if it begins to rain or storm will there be more of a challenge navigating and driving through mud and or rivers?

Will there be less magical damage rocks that instantly destroy any vehicle?

Will there be full in game lightning for each player, for example: while in a mp sessionon mud runner you can not see the other players lights, will this be changed?

Looks like this will be suggestion thread #999. Mostly unaswered by devs/pubs. Well, ok...
Actually im very happy with snowrunner new features. Most of them were (great to have it in past tense) in tops of our lists.

Mentioning snow&ice, some campaign mode (i hope it will be deep), bigger and even connected maps, real dashboards, stronger game engine, new cargo and missions, vehicles upgrades, mods for consoles and some more new featured. As a bonus we have new 25 International (R) vehicles, well, ok))
And we dont have any lost features i believe (steam i dont care).
Thank you Saber&Focus VERY MUCH!!!!!

So a couple of very wanted features left, i hope focus keeps their announcements for future news:

@Jellyfoosh thanks for the update

I'm happy to hear confirmation the game won't have microtransactions. Now I really hope the game does well in spite of Epic Store, because we needs games like this to set a example for the industry, that games can do well on their own without microtransactions.

I hope multiplayer is improved. If I pass somebody at night I to see their headlights coming towards me. If I'm following a friend along the beach, I want his terrain deformation to affect my game. If I happen to fall into his tire tracks, I should struggle more especially if he's already spinning a lot as is.

Hopefully we can share loads. Like I never got the whole having to pass ownership of logs thing in MudRunner. That was a convoluted mess. Just let my friend load my trailer, let me pack load and just go. What was that whole having to highlight every log and ask for ownership crap? I have literally never seen that before in any other game.

Also I hope we can share loads. Like if I'm on a trail and break down or run out of fuel, and lets say I have a buddy nearby. It'd be awesome if I could call him over, disconnect my truck from the load, tow my truck out of the way, then let my buddy connect to said load and have him go on with it.

MudRunner multiplayer had so much potential that was not lived up to. Hopefully SnowRunner accomplishes so much more.

Also I hope we get proper winch physics. While this admittedly was hilarious
https://www.youtube.com/watch?v=dUMjn_2Uv-0
It'd be nice to have a winch line that acts like a winch line in SnowRunner.

I see this NO to stuppid practice to get additional money from players for loot etc like in many games incl nba 2k.
Here we can see rewards for mussion, some stars and some credits (i see it as money to spend in game): 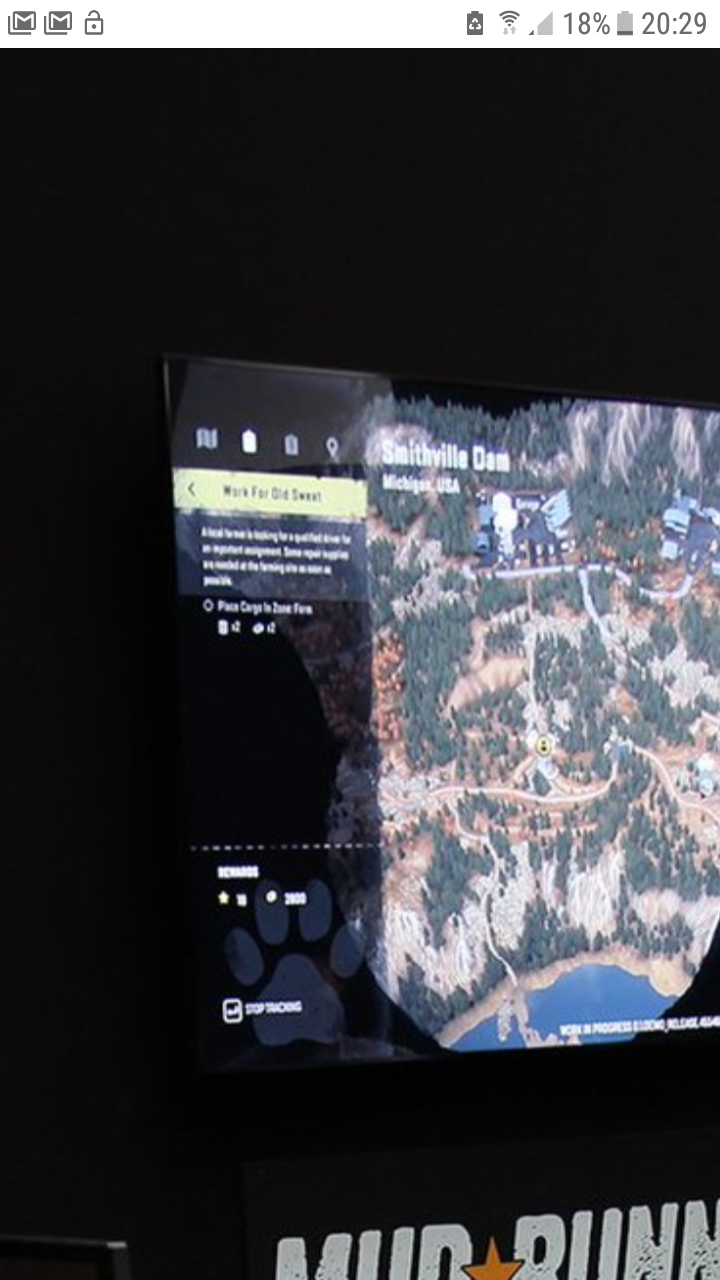 With it being on PC, will it ever come to steam? I know epic games gives a bigger cut to the devloper and by all means thats fine I am just wondeirng if it will ever be on steram as thats where most of my friends who play Mudrunner and Spintires OG all have the game and most of them refuse to get the epic games store after all of their current alligations. Just asking.

@Stazco I'm fine with game money (not real money in a game). Is that what you're concerned about? Game money is like a resource, much like fuel or repair points. It adds some management and strategy. I have no problem with that.

But no I wouldn't want to be wasting time on opening random chests to unlock things, like in MK11 and thankfully that's not going to be in this game.

@Stazco glad to see detailed maps. I like mudrunners maps but they kinda feel incomplete

It hasn't? To me MudRunner was a damn fine looking game. Maybe not Horizen Zero Dawn or Death Stranding levels, but it sure as hell beat the shit out GTAV or most other simulation games. I mean MudRunner compared to Farming Simulator or Mechanic Simulator? No contest, MudRunner blew those away graphically.

To me MudRunner is one of the realest looking games I've played. Farming Simulator looks almost to bright and colorful, looks cartoony. And dirt/dust doesn't stick to the tractors. Because yea, a tractors gonna spend all day, hours plowing and grooming fields. And the tires don't even track any dirt and at the end of the day the tractor is still clean and looks brand new. Because that's realistic.

Next to MudRunner it's no contest.

Yea we can only hope.

I dunno if that's the issue. I mean if I remember right GTAV uses the Pier To Pier system and that game has 30 player lobbies. Although seeing maps are 4 times bigger I did hope for more players.