Hello!
Loving the game so far but I just ran into a strange bug.
After sailing to New Serene my female De Sardet’s skin tone changed. And not subtlety. It went from the lightest possible to the darkest. I reloaded and tried again and the same thing happened

Hi @cipher_nine
Thank you for getting in touch! Do you happen to have screenshots or footage showing this phenomenon?
Have a great one Ok I took a couple screenshots. At first I thought maybe it was the lighting, but it is definitely not lol. Are the skin tones tied to each face separately? Once I reach New Serene it seems to be the last setting for skin color (for that face) in the character creator.

I mean, she is still gorgeous! Just not the character I created. Perhaps on the voyage she got a really really good tan

I’m sorry it happened to you too, but I’m also glad I’m not the only one! Sounds like maybe it’s tied to the face, as you said.

Looks like quite a few people on Reddit are having this issue as well. Just a heads up for the devs, it seems to only be with the second to last face for lady De Sardet.

Ya it’s def not a big problem. I just wish I had gone with darker hair now cause the white eyebrows are driving me crazy XD

They have a lot on their plate and I didn’t mean to come off as pushy at all! Was just trying to give as much info as possible so that when they get around to it it’s not as hard to pin down.

Same problem. I would really appreciate the response if this issue going to be fixed in the first patch, whenever it launches, not only because character appearance is crucial for a RPG, but also cause this bug seems to be more than just a skin tone slider messing up.

First time I've got this bug I was already almost 6 hours in (took my time, restarted many times to get the look right, looted everything, etc), so before restarting the game with a different face, I thought, it that's a skin tone slider bug, I could avoid it by setting it at the middle position #3, for example.
And to get at that position a needed skin tone, I dived into game files and checked the character_preview_library.sli. It stated for FACE #7 (face itemName="hea_huf_player_07"):

Where the last number is the brightness. So, it seems that original face texture is quite dark and warm saturated, cause to get in game original skin tones slider positions are set at 25 to 5 brightness, from lightest shade to the darkest.

So I've replaced them all just in case with the color tone I wanted for my redhead character, and while I was at it, I've also changed hair colors a bit to get a slightly more red hair tone option. 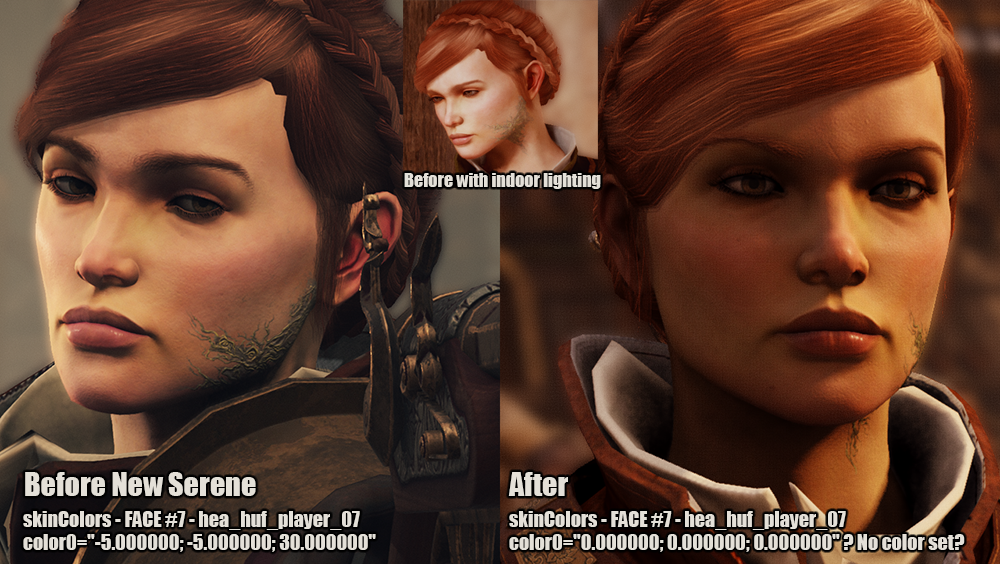 And it seems the skin color is not the only one that changed, I'm pretty sure the hair color was also different. So I went into character_preview_library.sli again, and tested colors again.

It might be also a lighting issue, but it looks like this head colors reset themselves upon arrival to the New Serene, not just switch between slider positions, but ignore color modifications completely.

Now I know it's not a game breaking bug, like those that prevent main story quest and so on, but it's a Role Playing Game, and once played with a chosen characters for an hours, we really should not be forced to accept this drastic change or restart playthrough again, just cause we also have no way to change a character appearance mid game (alas).

This face is even featured in the launch trailer: 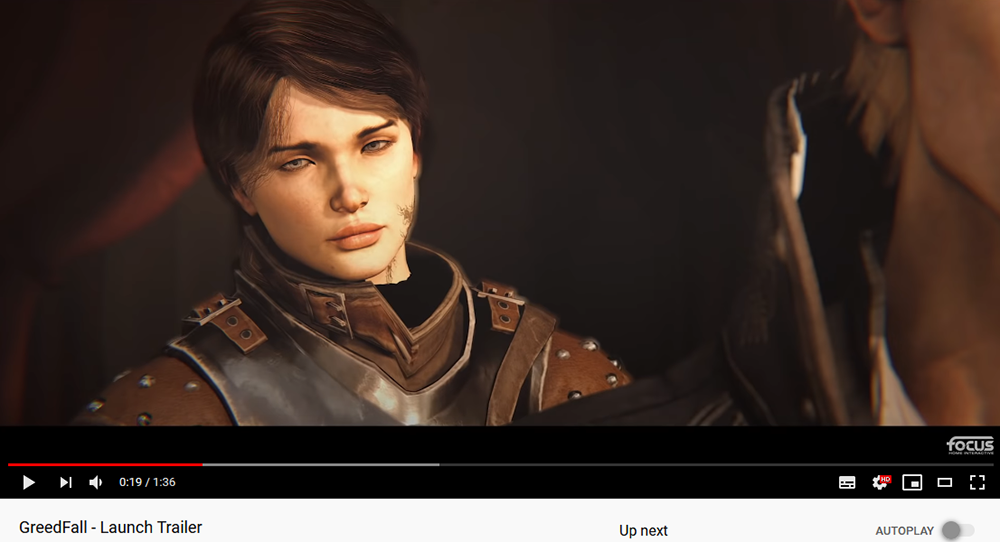 And as of launch it is not possible to have this look!
I was and still am super excited to play Greedfall, and even took a brief vacation for full immersion, but in current game state I'm just too tired of restarting and tweaking it at this point, and frankly a little bit afraid to venture forth, who knows what may change afterwards. Really hope to hear at least something about that patch we're all waiting for, if only there was any information as to when or what to await.

@Athymhormia You are amazing for having done so much research! (Also your redhead De Sardet is adorable.)

I did the same thing at first. After spending 6+ hours in Serene and encountering this bug, I rerolled her with the 2nd or 3rd slider, thinking it was a CC bug. No luck as the same thing happened. I ended up smashing through the main story anyways just to see the story, but I'm holding off on my completionist playthrough until we find out when it can get fixed.

Just in case the Devs are looking Face 7 this isn't the only bugged female face. Please apply any fix to the faces 5 - 6 as well! Same thing, you can choose whatever skintone you wish but it always defaults to the darkest skintone when you get to New Serene. I don't know how many people have used 8 but female faces 7 and 8 seem to share the same skin tone so in total, faces 5 - 8 are probably facing this issue.

Do you happen to know if this is something they're looking at fixing in the upcoming patch? No worries if not, was just trying to decide whether to start a new playthrough or hold out for the patch.

Ok! I thought it was just my eyes but the same thing happened with my MALE De Sardet. I knew I made him darker ... and yes it seems like it didn’t appear to be an issue until New Serene

I've had the beta patch installed for the last 5 hours. I started a new playthrough to see the changes and I just got to the island 2 minutes ago, the skin bug has not been fixed as of yet. I will email support again just to let them know. I really hope it's on the list of things to still fix.

Maybe if they could release the option to alter character when you arrive in New Serene that would solve the skin tone glitch. As of now, it's going back to the default skin tone it was assigned to in the customize menu; per face I think.

I'm having the skin tone problem with my male De Sardet. Chose a (modded) darker skin tone and on arriving in New Serene he ended up pasty white. Made him again but used the vanilla darkest skin tone to see if the modded colour was the problem but nope, got reset back to the default/pale skin tone on arriving in New Serene again. I even tried editing the game files so that all skin tone colours for his face/preset were the same shade but it did nothing to help. I can't play him at all anymore because his eye colour combined with his new pale skin is just a garish combo.

I noticed this too as I also chose the pale skin tone. But It really doesn't bother me a lot. I just pretend De Sardet received a little tan during her travels

I downloaded a mod from the Nexus last night to see if this modder was able to fix the skin change bug. It unfortunately didn't fix the problem. It seems like the game choses a default skin tone as soon as you leave the palace in Serene?

Aren't faces made of different complexion textures or is it only a brightness/contrast filter applied?

@Mushashi7 I think skin colors are linked to the heads. If you look in the file from that skin change mod it gives you a little insight into things. I don’t completely understand it all but it looks like certain heads are issued a skin color number (1-4, I think?)and there is a preset numeric based range of color allowed for each Face’s skin color within the game. The skin color information is for whatever reason just not carrying over to the gameplay once you reach the island and either going to the lightest or darkest color available in the skin color range. It’s a small thing for some but it can be pretty immersion breaking for others. I know Spiders has to be pretty busy as it is, but I really really hope they are able to fix this with the patch that’s in the works.