Before we start adding new vehicles can we fix some of existing ones please
This topic has been deleted. Only users with topic management privileges can see it.

Expecially Heavy class is currently riddled with broken trucks. They look good on paper but when you play a bit with them you quickly notice big flaws which draw them too frustrating to play.

Derry Longhorn 3194 (Oshkosh M911) - first of all in the game it says that the truck has AWD which is misleading since the middle axle is not powered and the truck is in fact 6x8. In the real truck you can lift or lower the middle axle, but in the game it's always lowered and it really hinders offroad performance of the truck. When going over hills you often end up in a situation when most of the mass rests on that dead middle axle and you get stuck. I believe that in the mud it doesn't help either, since when the powered wheels sink into the mud as they spin, the middle axle stays at the surface and once again you end up in a situation when most of the load rests on the dead axle.

Example of poor Derry hanging on the "AWD" axle: 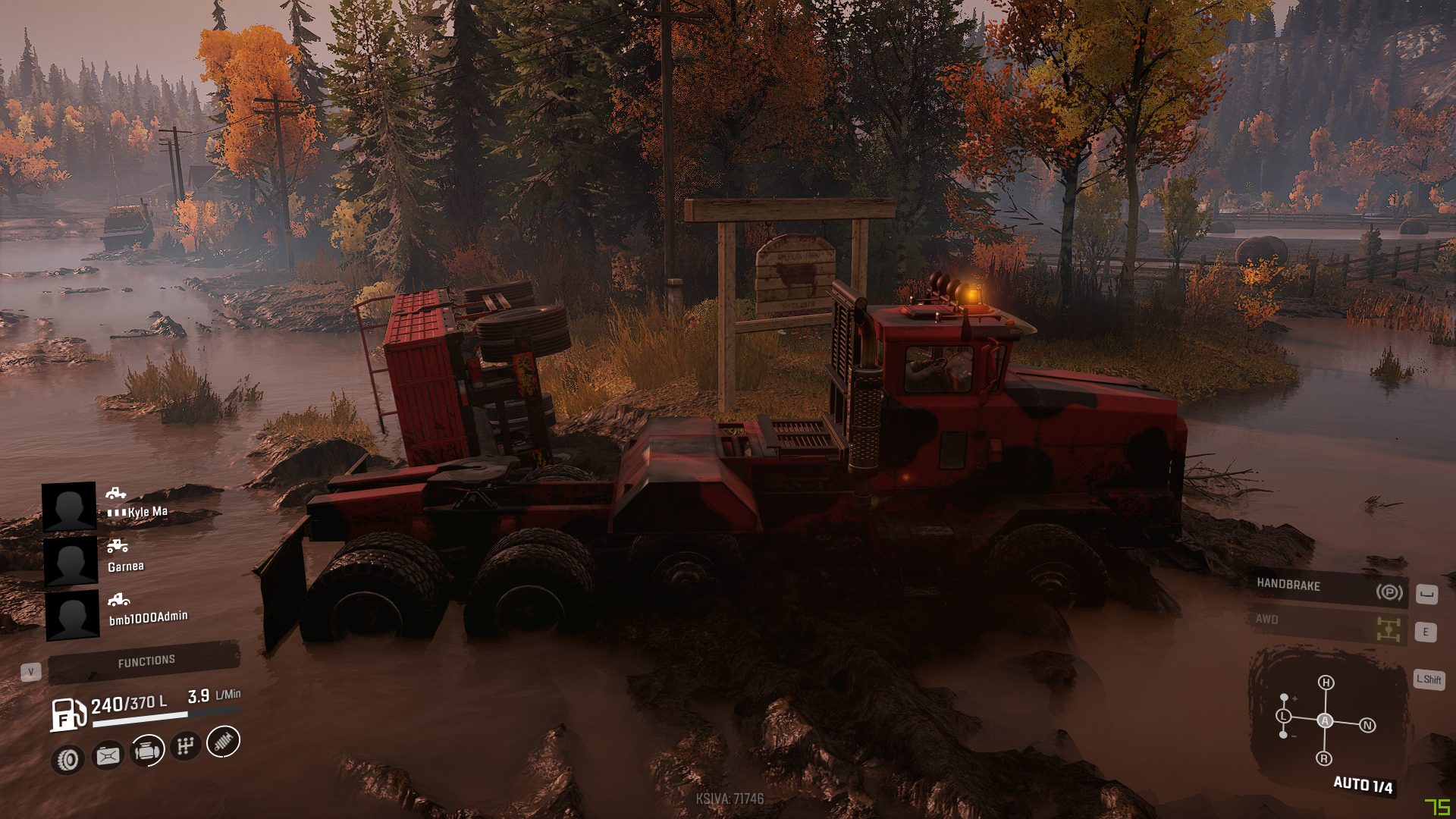 Turning radius is also negatively affected by the middle axle (as if the low steering angle wasn't bad enough). Easiest solution would be to just permanently lift the dead axle or straight up remove it as can be seen on some images on the internet: 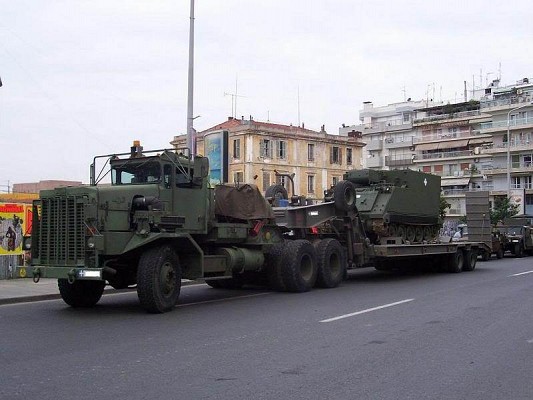 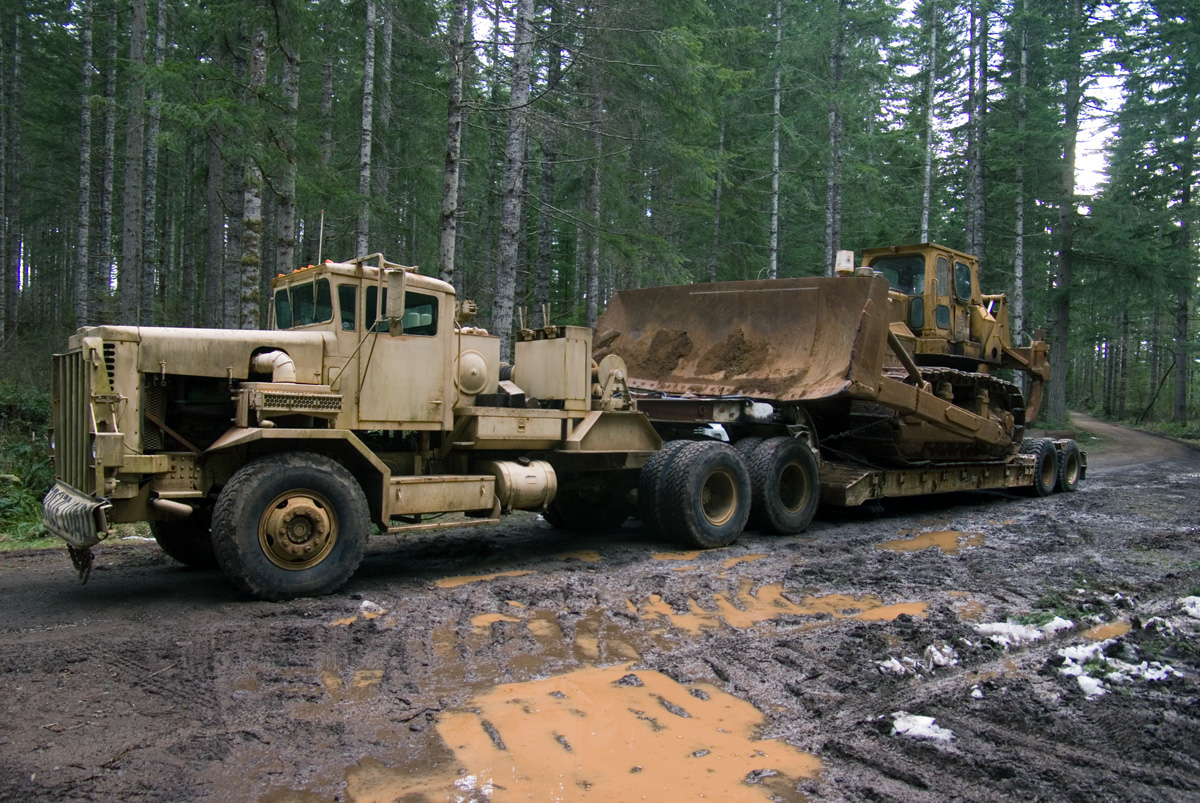 Azov 73210 (Kamaz 5340) - if you played with it once you should know what the problem is. The front end is too low to the ground and when driven on even slightly uneven terrain the truck is constantly hitting the ground and coming to a full stop. When compared to the truck it was based on we can see that the Azov has a flat cab bottom with the bumper protruding forward, while in the Kamaz there is a cut in the front end which improves clearance. 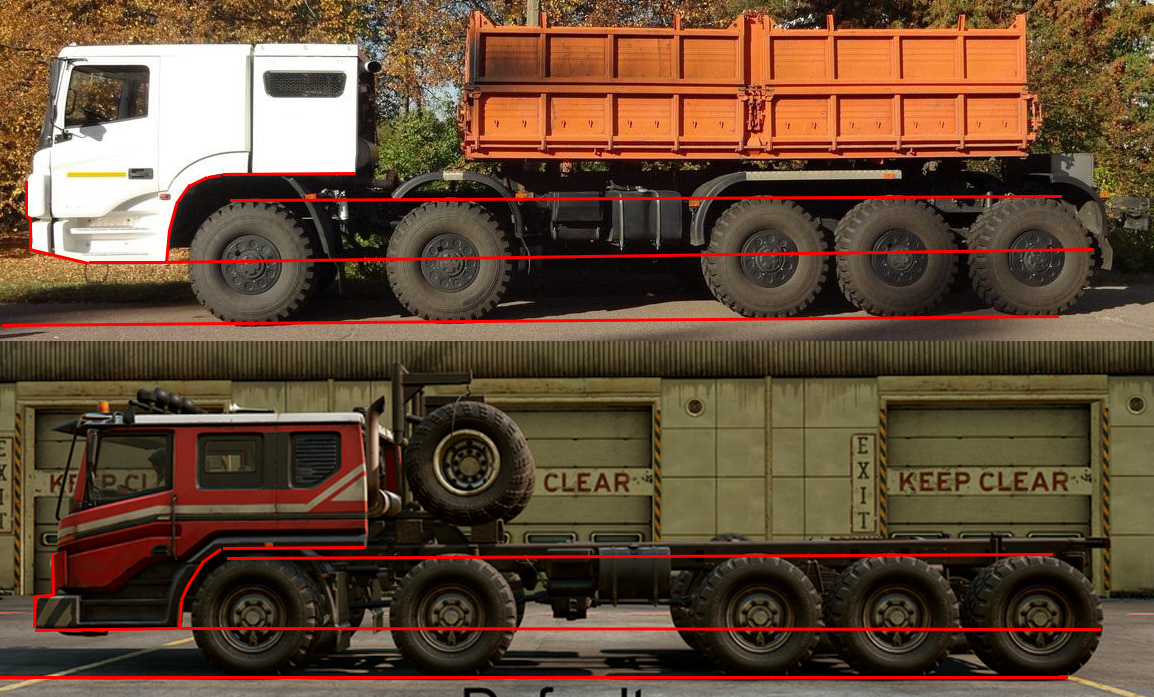 On top of that the entire cab seems to be placed too low on the frame in the Azov, while on the Kamaz it sits higher which improves the front end clearance even further. Easiest solution would be to just give it a raised suspension upgrade, but the proper solution would be to mount the cab higher on the frame. The front end could use some "facelifting" if you know what i mean.

Kolob 74760 (MZKT-741351) - similar as above. In this case it's even worse because you get engine damage from hitting the ground. Lowboy trailer detaches every time you hit the ground with the skid plate at speed which is infuriating. When compared to the real truck it's quite clear that something isn't right: 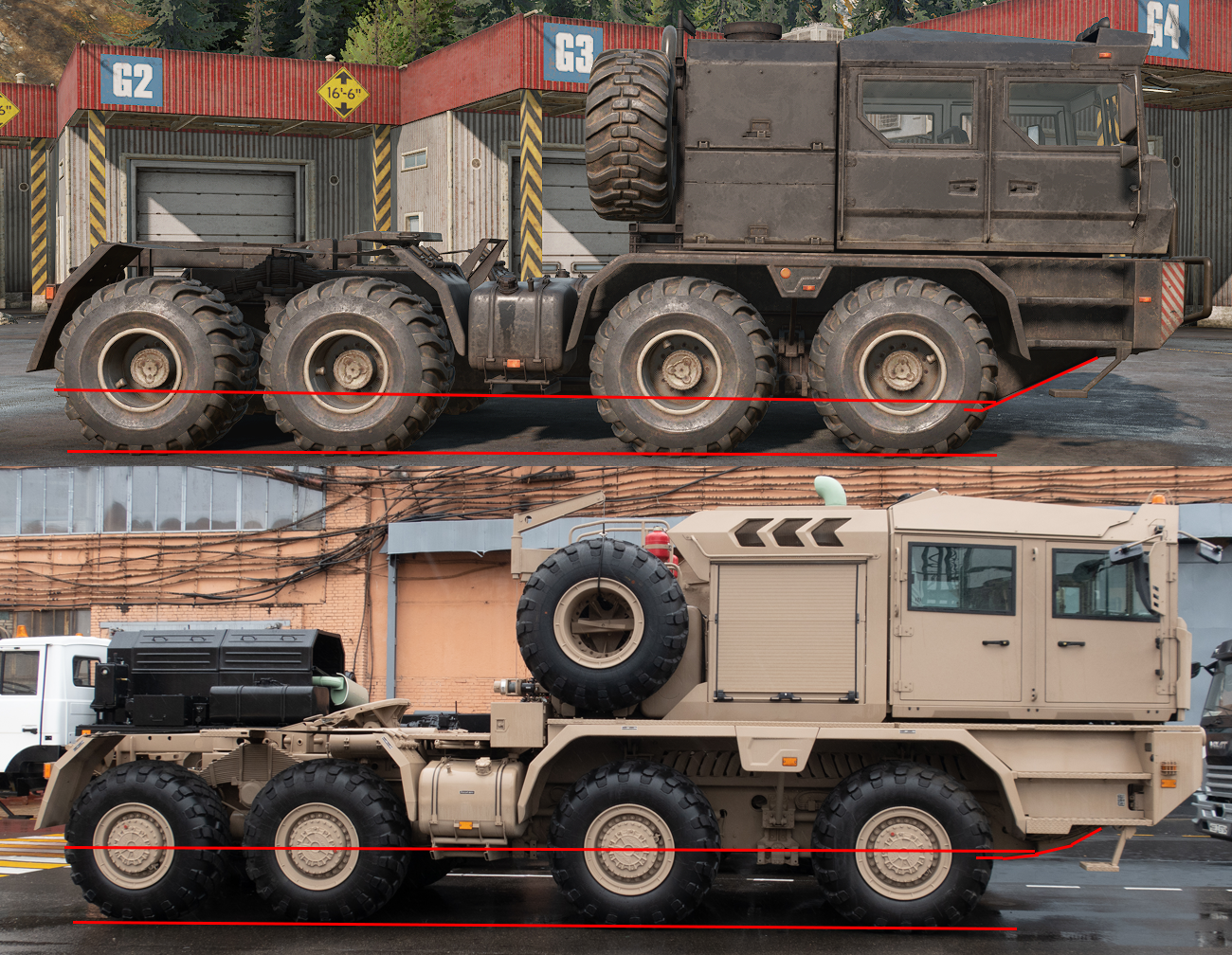 The real truck has curved skid plate and the entire frame seems to be thinner. Currently the truck has half the ground clearance of the other Kolob truck: 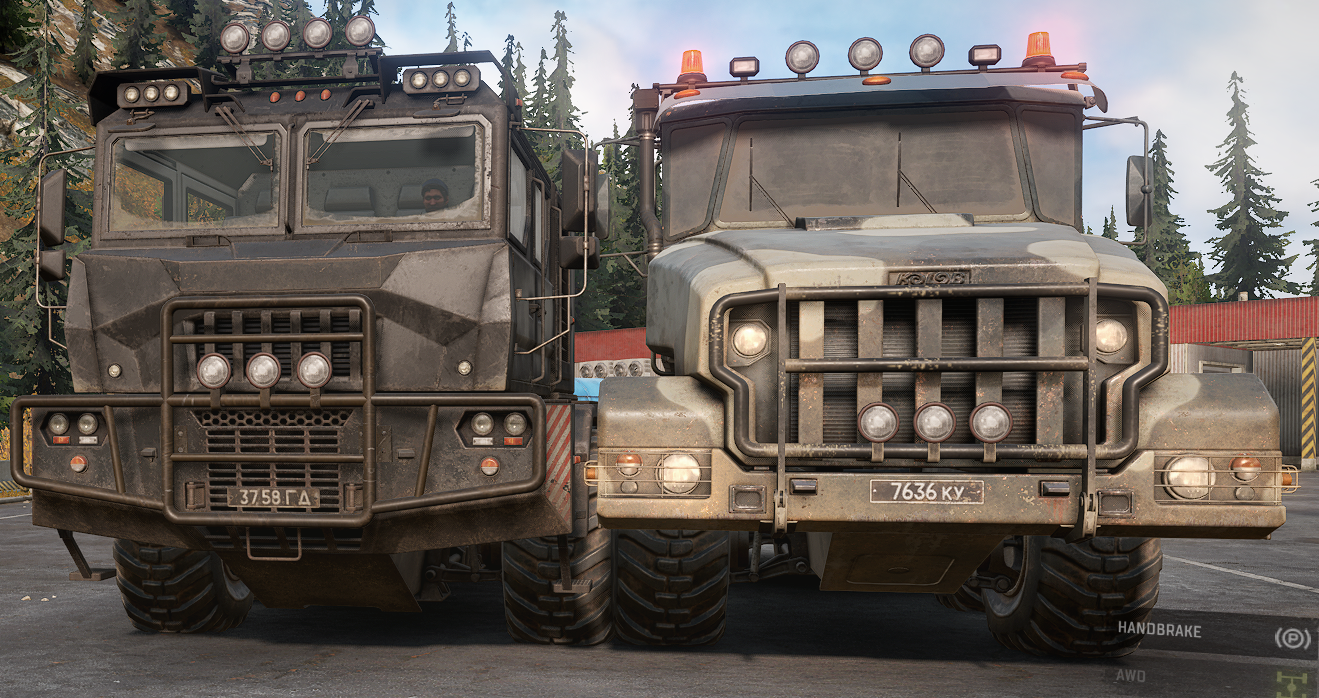 These 3 are the biggest offenders, but there is other trucks that need attention. For example Derry Longhorn 4520 and Pacific P12 could use a slight power buff since their wheels refuse to spin when going up steep hills even with light cargo. Azov 42-20 Antarctic could get more powerful steering since it sometimes refuses to turn.

There are also a lot of problems with Khan 39

When the International Transtar 4070A is combined with the Trapezium front bumper and the fuel tank, the bumper actually hits the road when you brake, taking damage from time to time. Again, this is related to the suspension stiffness being to weak. 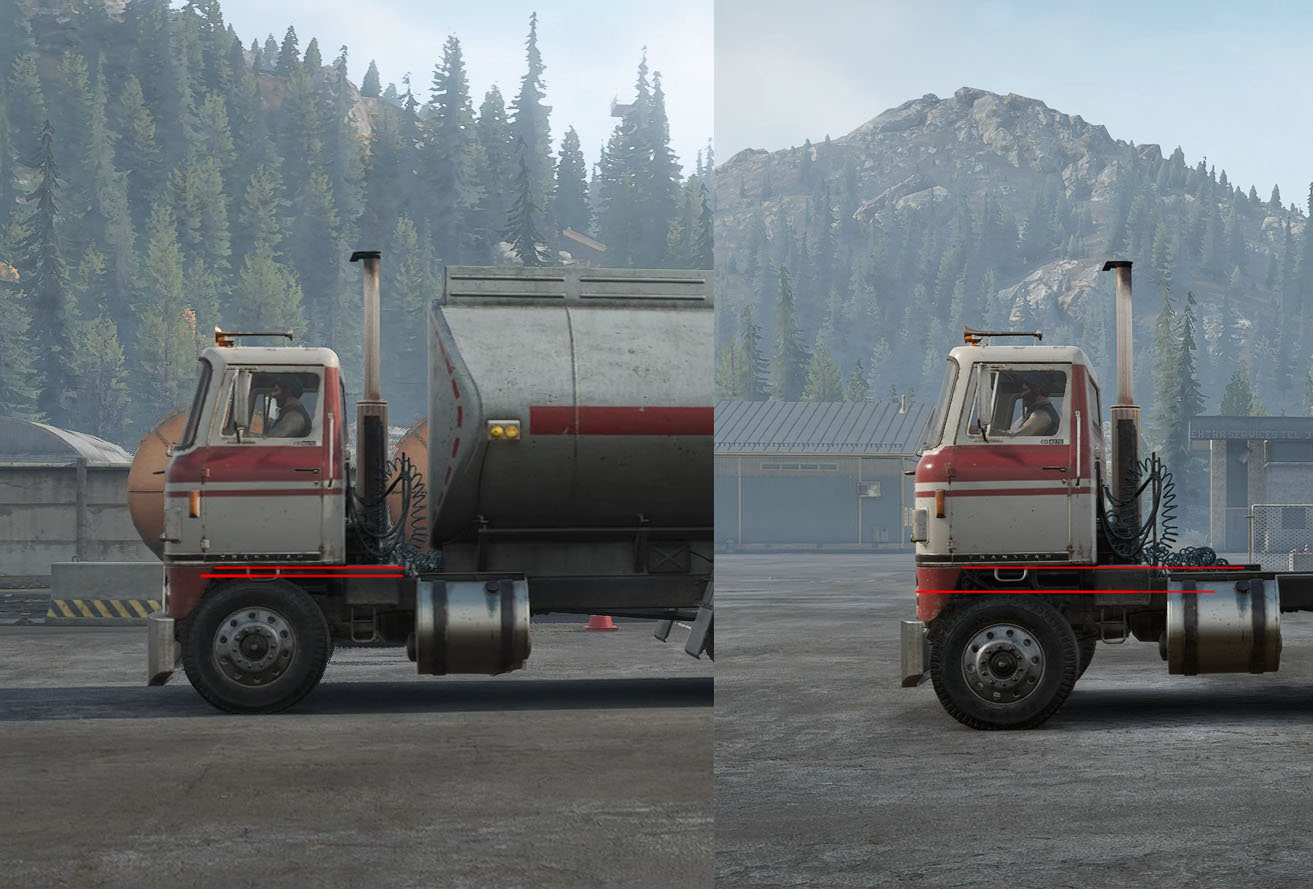 STEP 310E
Combined with the fuel tank, has similar strange front wheel behaviour, the wheels spasm out while turning. Again the suspension seems to be overloaded and not providing any suspension travel on the front

Great post,
was about to write something similar but not as detailed. A bit shorter:

Derry Longhorn 3194 - support wheel needs to be liftable or removeable or powerd
Azov 73210 - needs to be raised 3 inches in default conf and front bumper shortend/lifted/fixed
CAT680 - rear end is 2 inches to low, rear suspension needs to be higher, check with 5th wheel though

All suspensions: fix and rebalance dampening.

The suspension problem is not an easy fix, when you buy a truck for a spcial use you configure it such way it is able to handle the load.

When it is done you will less likely remove a tanker and fit a flatbed at least not on daily basis wich mean you have fixed set up for suspension, drive train, engine etc.

In the game to keep suspension consistent in every situation it would require a dedicated suspension setting for a lot of addon individualy wich would be great but realisticly unless there a function who is capable to react to the mass parameter and adjust to it, it seems quite a lot of work.

@1nsane said in Before we start adding new vehicles can we fix some of existing ones please:

I've been playing with this truck a bit lately, but I've been only using it with low saddle and semi trailers since it doesn't have AWD so you don't want to put too much weight over front axle anyway. In that setup it worked fine, it would hit the ground with the front bumper from time to time when offroading, but its a highway truck with small wheels and no raised suspension so it's to be expected. Now that you pointed it out, I've tried it with the fuel tank and indeed there is a problem:
https://streamable.com/3xhh7b
and that's with the stock front bumper, but with Trapezium front bumper it's absolutely unplayable.

STEP 310E
Combined with the fuel tank, has similar strange front wheel behaviour, the wheels spasm out while turning.

Sadly this problem affects pretty much every truck from Highway, Heavy Duty and Offroad classes when you combine them with a fuel tank.