Enhanced Edition - First Update
This topic has been deleted. Only users with topic management privileges can see it.

We're very happy to release the first update for Space Hulk: Deathwing - Enhanced Edition and we’ve carefully read your feedback and reports about this major update. This update is aimed to introduce some quality of life changes and bug fixes. This was already out on PC, and is out on PS4 today! 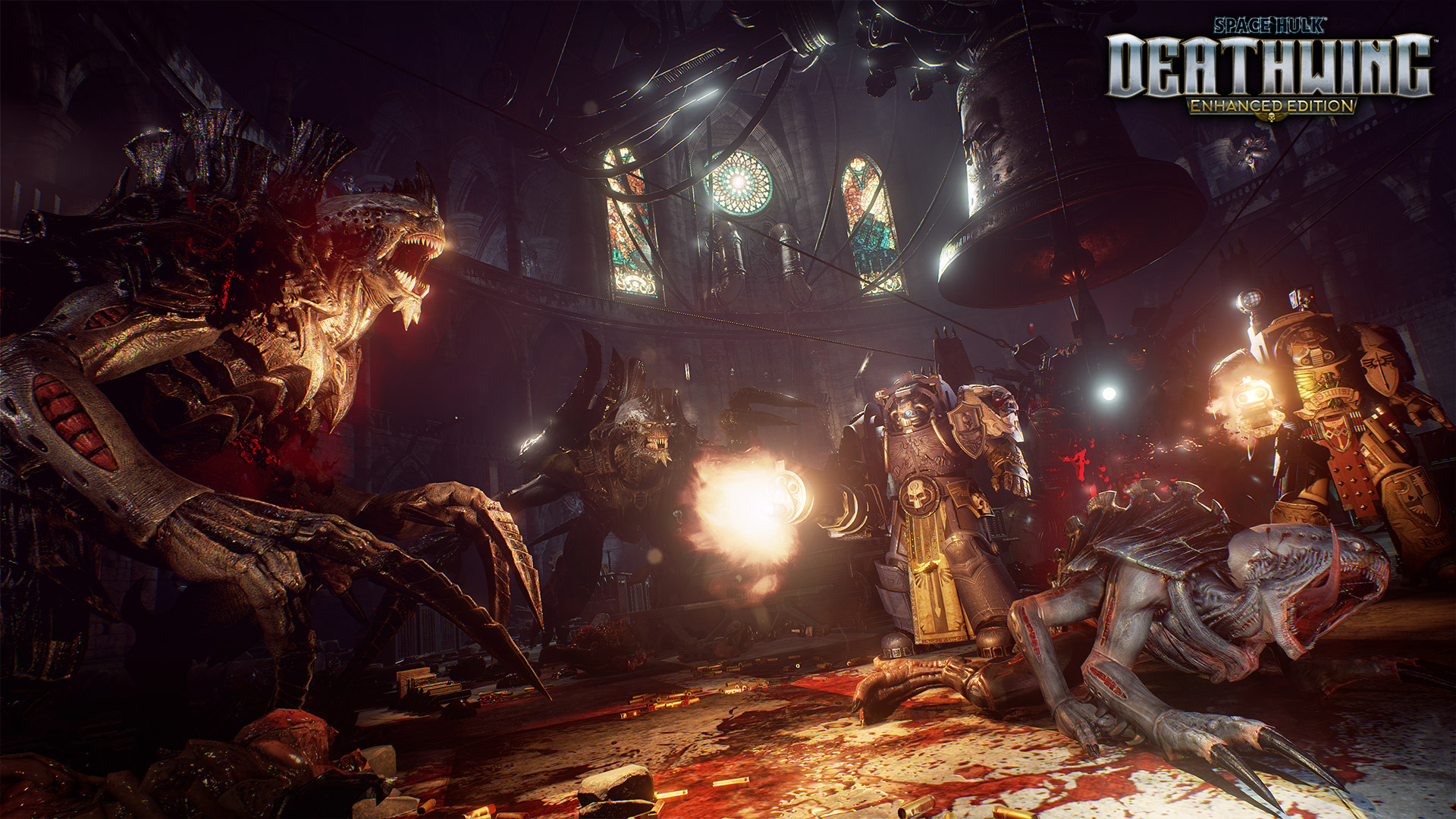 Alalala... I would have liked... But TELLLY loved writing a positive post for this new edition of Space Hulk: Deathwing! I wanted to believe it as soon as it was released more than a year ago, believe it via the MAJ since, believe in its redesign in Enhanced Edition... But that's no, alas.
A beautiful coating, skins in mass and quality, a tree of talent efficient and well balanced, a new class supra badass, weapons re-balanced, new enemies well thought and BIEN AGREABLE TO SULFATER it must be admitted, yes. And now you're going to say, "What else mtf!? That's exactly what we asked the Devs to do."
And yes... Great, yeah. Except it ends great there too, and that's too bad. Absolutely, but then NO gameplay, interface, and carastrophic multiplayer platform flaws were fixed.
We find ourselves with the same soft and imprecise playability, this lack of "percussion" and impact on the weapons at the CaC, the enemy AI has the pickup, the allied AI we don't even talk about, it always takes 15 attempts to succeed in joining a multi-player game that will crash once out of three in a row. The missions are long, and lose all the XP gain after 30min of game for a server crash or a decor of the host (yes, the game closes if the host leaves, welcome in 1998), and well it makes ONE PEU pain in the ass. In short... we still end up bored quickly, especially if we have already sanded the original version.
The game could be VERY good, we feel the passion of the dev studio behind all this, but the mayonnaise does not take... A thousand times, alas.
my ultimate question is addressed to the developers, when the previously mentioned problems will be solved?

The bug "Fixed sometimes not getting XP at the end of the mission." is not fixed as I lost most of my XP and currency progression as client when host left.

been about 2 weeks since this patch. Considering the track record so far, its been exactly 1 month per patch, based on this logic were probably going to receive another patch on the week of the 17th of July.

Enhanced Edition goes live the 22 of May

Last patch was very very very little, i hope next patch is big, and come soon

In one and a half month, we receive a few only, and there´s lot of work to do, bugs/balance/ideas

Good to everyone, please, I love your game although it is still unbalanced weapons, classes, enemies, etc ...
I would just like to ask you for an urgent favor, and that is that the console game is almost unplayable and unfortunately every day there are fewer people and open games to play in multiplayer .... Take out right away that you can patch ONLY for the multiplayer because it is dying of the unplayable that is done in 3/5 games. Thank you very much

@all users, I did some looking and from what I can see the community managers behind focus interactive are basically swamped with other priority tasks. Like the closed beta of "Fear the Wolves", "Calling of Cthulhu" etc. With that being said the relative silence and the way the pendulum is swinging, I am willing to bet there will be a response around the last week of July, or August, followed by an announcement of what is to come next for SHDW. This would be a good move considering the upcoming release with Battlefleet Gothic 2. Players who play this game probably play Gothic as well. These are my educated guesses and I personally think there will be more content because focus will continue to hold the license behind the game for awhile considering battlefleet's license being behind games workshop as well. In other words I am expecting more content, how large it may be, I think will be bite sized chunks, its a ten man studio and I am not expecting a large sum of content. A consistent flow would be nice though.

There´s much work to do still here

Thats not a patch, thats a smoke grenade to try shup up players...

@rioku are you suggesting they paid for the data allowed to send to steam and through their servers at 400 some mbs to all their users, just to keep them quiet? cause you know; everyone is just "dying" for the new update to release? No, I doubt that severely, in fact its only reassuring to me that they are indeed following up with a new update and have also showed physical progression. I know its hard for someone like yourself who has made avid posts about patience and etc. However you need to find new virtue in your patience. Show some trust again and instead build some hype, keep the fires positive.

This 400mb update, though minor, sounds promising and reassuring that Streum haven’t given up; considering the negativity writing off the game and trashing it before it’s given a bit more time to be fixed properly. I think it would be a damn shame to be so close to finishing but not fix these breaking bug issues that are causing so much frustration.

Melee is also a top priority that needs fine tuning and would improve the game drastically. Streum should take note of Vermintides melee system, if not copy it, such as cancelling attack animation for more immediate blocking in close combat, continued charged attack fluidity from one stroke to the next and a vibration on charge release, etc. Then melee can be more tactical and dynamic than just mashing light attack, because waiting for attack animations to reset before repressing the button to swing again is annoying. Just play V1/2 on a controller and ull see the differences.

Streum said more smaller updates for PC and less often larger updates on PS4. As there’s only 10 devs, we should cut them some slack to continue patching the issues. All games have their fair share of bugs so let’s not lose faith and say it’s dead n buried when the fact is SHDW isn’t a RNG loot game built for eternal grinding for God rolls, so player numbers will drop naturally. Additionally, people have stopped playing coz they keep getting kicked out of games and it crashes, so top priority patches are Integral to the games longevity by fixing the online issues first.

Myself and others have also suggested incremental locks on customisations (unless they’re won) so that people don’t just bypass a large chunk of Adornments and for example, only buy Acid damage reduction -50% without buying the lesser adornments first. This will promote more longevity.
Also, daily/weekly tasks or whatever could be a thing to keep people playing?

It would be nice to have some news from Streum soon.